The term Bulbous Nasal Tip is used to describe a nose tip that is excessively round, bulging and/or heavy in appearance. In New York City, Board-Certified Plastic Surgeon Dr. David Cangello is highly experienced in performing rhinoplasty with specialized techniques to correct a bulbous nasal tip. When performed by an expert, nasal tip surgery allows the nose to blend seamlessly with other facial features, enhancing each patient’s facial symmetry and beauty.

Why is Nasal Tip Surgery Important?

Oftentimes, the lower third of the nose—which includes the tip complex—is either not addressed by the rhinoplasty surgeon in cases when it should be, or it is inadequately or improperly treated, resulting in an unnatural appearance following rhinoplasty surgery. An obviously augmented or “done” look occurs when the surgeon straightens the dorsum but leaves the tip and lower third of the nose with fullness in the supratip area. This can lead to a pinched-looking tip, an excessively large infratip lobule (the part of the nose just below the tip that often hangs in people with large noses), or a columella (skin bridge between the nostrils) that hangs or droops well below the nostril (alar) rim on profile view.

The proper relationship between the alar rim and columella on profile view is that they should be parallel and approximately 2 mm apart. Many surgeons do not properly address these issues of the lower third of the nose and this leads to a less than optimal rhinoplasty result. Dr. Cangello takes a comprehensive approach in every nasal tip surgery he performs.

For decades, the widely accepted methodology for nasal tip refinement by top rhinoplasty surgeons in the United States has involved the very specific practice of utilizing suture and grafting techniques. However, Dr. Cangello feels that these techniques often result in an unnatural appearance to the lower third of the nose. This is due to the fact that traditional techniques often create a tip that is too refined and unified (or pointy). Conversely, the tip created by using these techniques can result in a rounded shape where the nasal tip appears pinched at the transition between the tip and alar (nostril) lobule. Additionally, there is no shadow in the supratip (the part of the nose just above the tip) area, resulting in a tip that appears contiguous with the nasal dorsum, rather than separate and distinct.

Other concerns with traditional approaches to tip plasty include: an infratip lobule (the area just under the tip) that is still too prominent and/or a columella (skin bridge between the nostrils) that hangs too low relative to the alar (nostril) rim on profile view. In order to create a beautiful and natural tip all of these things must be addressed and the proper highlights and shadows around the nasal tip must be created.

For patients with dense or thicker than usual nasal skin, Dr. Cangello may determine that debulking of the fibrous fatty tissue around the nasal tip may be necessary for a beautiful aesthetic and optimal functional result. Sometimes a septal extension graft may also be used. The lower lateral cartilages, which form the tip of the nose are sutured to the septal extension graft in this instance, pushing them forward in order to create a “tent pole” type structure that pushes out firmly against the undersurface of the overlying thick skin of the nasal tip. Firmly pushing against the undersurface of the thick skin helps to create tip definition.

When determining his surgical approach, Dr. Cangello uses the concept of aesthetic nasal polygons, in which the nose is analyzed as geometric units. This approach allows for a mathematical analysis of the underlying nasal structures, which informs the understanding of the way that shadows and light influence the appearance of the nose. With this information as part of his surgical planning, Dr. Cangello can rearrange or reconstruct the nasal structures in a way that is symmetrical and aesthetically pleasing and ensures that the nasal surface reflects light in a way that is natural-looking. 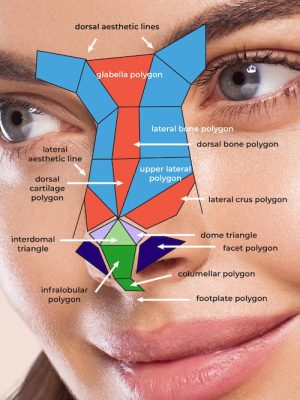 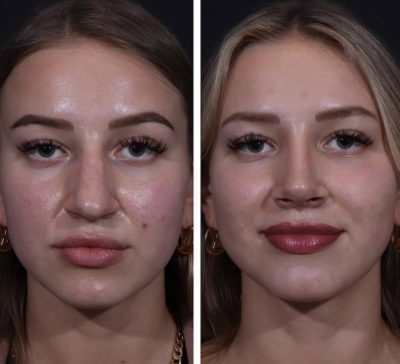 Ultrasonic Piezo Rhinoplasty results. Patient is 5 weeks post-operative in the after photo.

View Bulbous Tip Rhinoplasty Before & After Photos On Our Instagram Gallery

Typically, patients that present with a bulbous nasal tip have concerns with their nose being too round or wide at the tip and lacking definition. A bulbous nasal tip can be caused by several genetic factors, such as dense soft-tissue coverage, prominently rounded or dome shaped tip cartilages, poorly defined hypertrophic lower lateral cartilages, or poor cartilage strength. Dr. Cangello will determine the best surgical solution for each patient after determining the specific anatomical factors that lead to the presentation of the bulbous tip. Once a treatment plan has been established, Dr. Cangello can reshape the nose to define an elegant, straight-edged appearance in harmony with the rest of the facial features.

Those who seek out Dr. Cangello for his expertise in Bulbous Tip Rhinoplasty typically express the following concerns:

An important factor in determining candidacy for Bulbous Tip Rhinoplasty is that the patient maintains reasonable expectations for the outcome of their procedure. Dr. Cangello’s surgical technique can address concerns regarding a drooping or too-prominent tip, excessive nasal skin, nasal width and asymmetry, but cosmetic nasal surgery can only enhance a patient’s nose within the limits of their existing facial characteristics.

As with any surgical procedure, the most important aspect of a Bulbous Tip Rhinoplasty is choosing the best plastic surgeon to perform your procedure. Dr. Cangello is a Board-Certified Plastic Surgeon who is lauded as NYC’s foremost rhinoplasty expert and has enjoyed features on CBS and Fox News, as well as countless web and print publications such as Harper’s Bazaar, Seventeen Magazine and Refinery29, which have featured his patients’ rhinoplasty journeys. Contact us today to schedule a consultation.