Nasal osteotomies are a foundational technique in rhinoplasty surgery; while there are several different approaches to osteotomy and each surgeon may employ a preferred strategy, there is consensus that osteotomies are integral to dorsal hump surgery and many nasal bridge procedures.1 Dr. David Cangello is a leading rhinoplasty surgeon in New York City and one of the first plastic surgeons to offer preservation rhinoplasty in the U.S. He has developed finely honed surgical skills, including a precise approach to nasal osteotomy with the use of Piezo ultrasonic rhinoplasty and preservation techniques, that is customized for each individual patient for natural-looking results.

What Are Nasal Osteotomies?

Answering the Common Patient Question, “Will my bones be broken during rhinoplasty surgery?”

Osteotomy refers to any surgical procedure in which a bone is cut in order to realign or reshape it. During an initial consultation appointment, patients considering rhinoplasty sometimes ask “if their nose will be broken” during surgery. This is a misinterpretation of osteotomies that increases patient anxiety. In fact, osteotomies are a complex but important surgical maneuver that, when done correctly, contributes to beautiful aesthetic results. 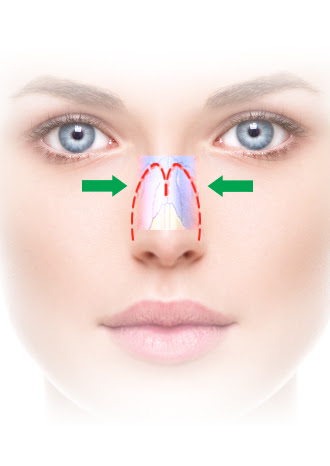 In this image, the shaded area shows the nasal bones, with the lines illustrating medial osteotomies on the top of the nasal bridge and lateral osteotomies along the base of the bony nasal pyramid, where the nasal sidewall meets the face.

In a traditional rhinoplasty approach, a surgeon uses a hammer and chisel to create osteotomies. Dr. Cangello uses Piezo ultrasonic technology for all rhinoplasty osteotomies. Piezosurgery utilizes ultrasonic waves that allow Dr. Cangello to create osteotomies with a tool called a piezotome. This technique affords a superior level of precision and avoids the physical trauma that can be caused by a hammer and chisel. Studies show that piezo rhinoplasty results in less bleeding and fewer complications during surgery and less swelling and a quicker recovery after surgery.2

Types of Nasal Osteotomies and Their Indications

There are many different variations of nasal osteotomies, but most fall within these categories: 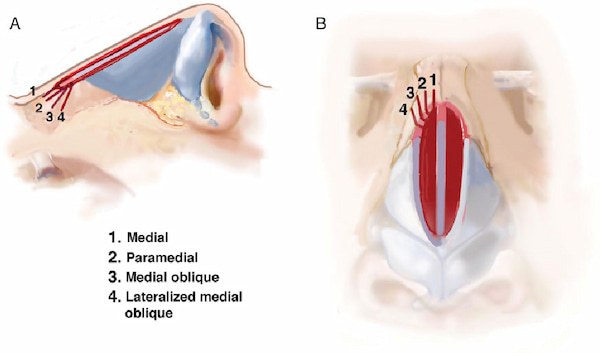 Preservation rhinoplasty is an advanced approach to nasal surgery that is designed to preserve the dorsum, including the thin layers of lymphatic and blood rich tissue above (the periosteum and the perichondrium). Dr. Cangello is a pioneer of this technique and one of very few surgeons in the United States who is experienced in preservation rhinoplasty. He is also one of the first few surgeons in the U.S. to have performed Preservation Rhinoplasty.

In a traditional nasal bridge procedure in which the goal is to remove or minimize a hump the surgeon will typically remove a piece of the nasal bone, leaving the septum exposed, and then rely on grafts to shape the dorsum. In a preservation rhinoplasty procedure, Dr. Cangello employs very precise osteotomies in order to reshape the dorsum while preserving the native structure for a more natural-looking result.

In a preservation rhinoplasty procedure, Dr. Cangello will make a nasofrontal osteotomy across the radix, which serves to unite the preceding transverse osteotomies along the sides of the nasal bone where it meets the maxilla. Making these three osteotomies in continuity—lateral osteotomy on each of the left and right sides, both of which meet with the lateral aspects of the transverse osteotomy at the radix—allows the entire bony pyramid to move as one flexible joint, as opposed to separate pieces, which is how the bones move when traditional osteotomies are made. The osteotomies in preservation rhinoplasty allow the entire bony segment of the nose to be “preserved” as it is pushed downward toward the face after the osteotomies are made. This is in contrast with the structural approach to rhinoplasty in which the bones of the nose are rasped along the dorsum in order to reduce their height. Since the bones are thin, rasping them along the dorsum ends up separating the right from the left nasal bone, such that when lateral osteotomies are made, the bony pyramid is no longer a pyramid. It is separated into two (left and right) pieces of nasal bone. When the pyramid of the bony dorsum is pushed down in a preservation rhinoplasty, a straighter, more symmetrical nasal bridge is revealed without any need for reconstruction. 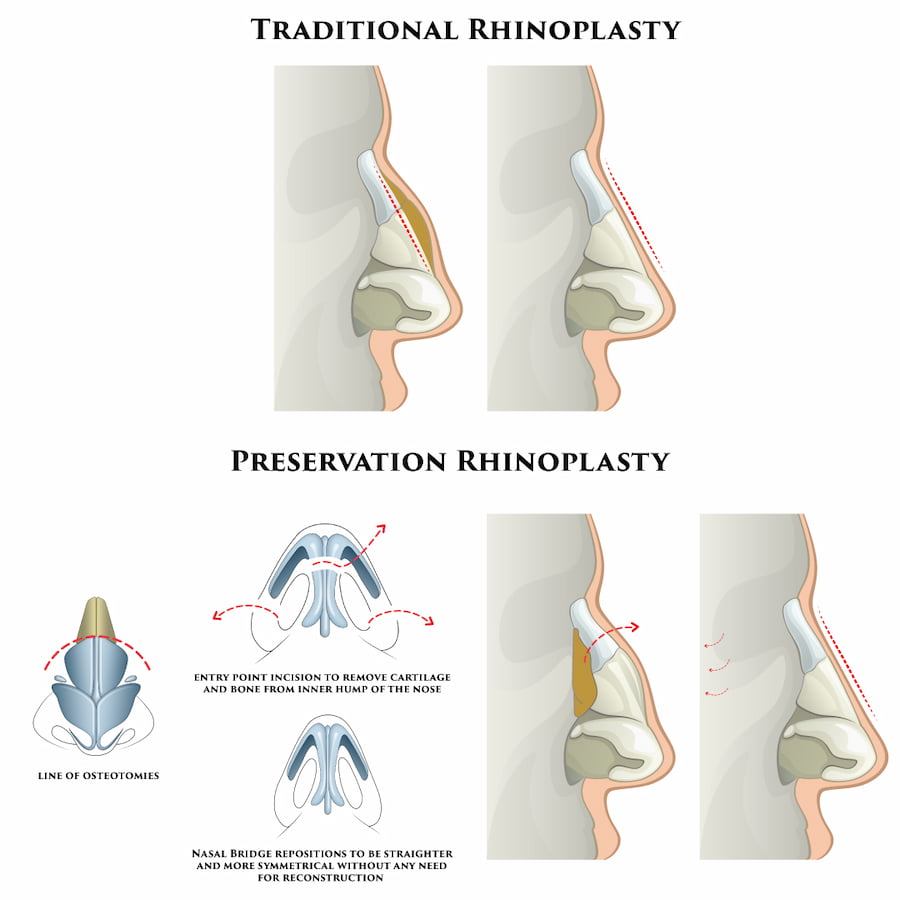 Dr. Cangello is a board-certified plastic surgeon and nationally recognized rhinoplasty expert. Contact us today with any questions about the rhinoplasty process, nasal osteotomies, or preservation rhinoplasty.